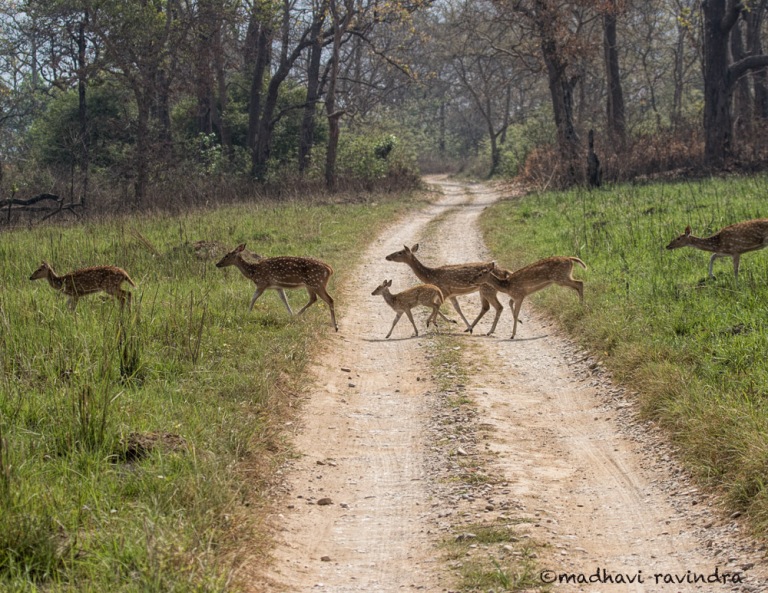 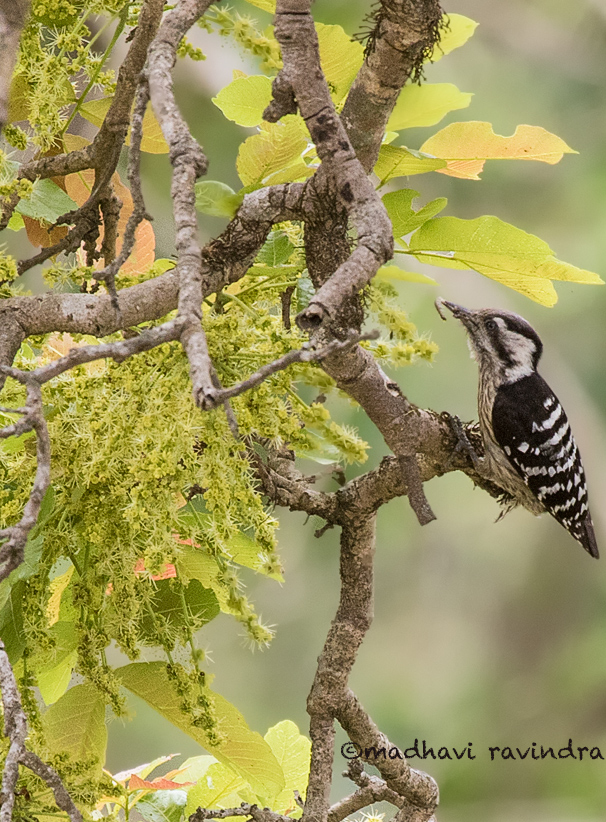 Day1
An overnight train, Ranikhet Express from Delhi to Ramnagar arrived at 5 am , where our driver Rajesh picked us. A quick tea at Corbett Motel and we were on our way to Dhikala guest house. As we entered the gates and registered, the first birds to greet us were bulbuls on the an Amaltas tree, with its rich mustard coloured blooms. The Ashy , Himalayan, Red -Vented and Red whiskered were kicking up a racket. A roadside bike with two guys taking a selfie on foot drew our attention to a huge Tusker feeding not 20 feet away in the jungle. They requested us to inform them when it made a move!
The picturesque route ran along the Kosi river which was running a bit dry at this time. The weather was cool early mornings and late evenings and warm to hot during the day. The call of something resembling the alarm call of a langur was actually the Dollar bird perched on a bare tree. A cackling chorus of laughs and a group of White thoated Laughing Thrushes and White Headed ones crossed the road ahead. However they didn’t sit at one place long enough for a click. Spangled, Ashy and Black drongos, Greater and Lesser Flame back woodpeckers, Long tailed Minivets, Bulbuls, Black lored tits formed hunting parties from time to time enroute.
At the Ghairal guest house we had some lip smacking gobi and aloo paranthas and spotted the Greater yellow naped woodpecker.
A small trumpeting call from the tree tops  was that of a Red Breasted Parakeet , a lovely bird with a crimson patch on its breast.
As we were nearing Dhikala , a herd of of tuskers approached us near champion Road and crossed it towards a water hole. Only a mother and her calf entered a water hole seen from the road and we took some pics as they splashed around, and had a nice mud bath before moving on.
A stop at Highbanks which offers a view of the river and the opposite bank and is frequented by a male tiger who is seen here.  A Stork Billed Kingfisher dived in for a fish and enjoyed the meal.
The Dhikala guest house is located on the river bank with excellent views of the opposite hills as well. The rooms are large and clean and have 24 hour electricity. Food is simple and mainly roti, subzi, dal.
Our first safari started at 3pm and offered spectacular sights of elephants in the grasslands, in the river along the Sambar road which is a road on the high bank of the river, as well as The Chaur, the name given to the grasslands. The raptor population consists of Red headed vultures,Lesser  and Pallas fish eagle and Crested serpent eagle The plentiful fish in the shallow waters attracts Common, White Throated, Crested and Pied kingfishers near the river  seen from Sambar road.We missed the tryst with the tiger on both sambar road as well as the Mota Sal which is the big trunk of a Sal tree struck by lightening. This tree is at the western end of the Thandi Sadak which at this time was frequently crossed by a male and female tiger from the thick forest on south to grassland on the north. Others did have lucky sightings.
At the Chaur,a  pair of young elephant calves were playing with one herd close by. As soon as our vehicle approached, one of them ran towards a distant herd trumpeting all the way and the other one ran towards the nearer herd. Obviously we had disturbed a nice game played between two juniors of different herds!!!  The grasslands with plentiful insects also offers sightings of Chestnut, Blue tailed as well as Green Bee eaters near the grasslands all of which we clicked . A very peaceful nights slumber was broken by the loud trumpeting and noises by an elephant herd on the river bank. A welcome disturbance from the urban hum of cities!

Day 2
A wake up tea at 5. 30 and our safari took us over the river on a wooden bridge where we waited as there were some Chital and Monkey alarm calls were heard. Here we saw both male and female  Paradise Flycatcher , Spotted fantails, kingfishers and bulbuls. A very friendly White Capped Redstart approached our jeep and seemed to enjoy posing for the cameras! Later a jeep which ventured into the opposite forest was rewarded by sighting a tigress with a chital kill.

The evening safari was spent near Thandi Sadak waiting for a tigress which peeped through the grassland and went back startled by a jeep. Rows of gypsies stood in silence till sunset. The safari elephants arrived at the same stretch carrying some international guests and a minor traffic jam was caused, these animals were given way by the gypsies with some effort . They later saw the tigress by a waterhole inside the forest,a spot unapproachable by vehicles. A word about these poor creatures whose plight carrying heavy loads and continuously spurred on by a sharp sickle like contraption by the mahouts, moved my daughter to vowing she would do her bit against cruelty to animals!

The morning safari was marred by rain and cloudy conditions . This time we went Paar or across the river, here the landscape is dense forest where emerald doves and a glimpse of the lovely common green magpie were the highlights. A number of sambar and barking deer alarm calls were heard but no tiger. By now our guide and driver seemed in low spirits about us not sighting the orange stripes though most others had! We were thoroughly enjoying elephants playing, mock charging and mud bathing , apart from birding of course. We decided to opt for staying the non safari 11 aM to 2 45 at the Thandi Sadak watch tower. We saw canopy level Plum headed Parakeets, flight shots of the Dollar bird, Grey headed  Woodpecker and Black hooded Orioles apart from a very ferocious trumpeting near Thandi Sadak alternating some alarm calls. When we came down the tower, we saw the source of the trumpeting as a lone young elephant running helter-skelter in the forest probably separated from its herd. We kept our distance!! Our friends at the Sambar road watchtower saw a pair of jackals killing a chital and some Red headed and Griffon vultures fighting for the kill. The latter were hovering the sky as we came back for quick lunch before the evening safari. That evening, a cry from a jeep behind us informed us that a langur had peed on a tourist in it!! A few minutes later at the same spot there was a loud crash  and the tree with the langurs crashed due to the games they were playing.

There is a waterhole down sambar road which has Common Green Magpies nesting nearby.  Even as I asked the guide,Mr.Zakir Hussain, to listen for its calls, lo behold it was on our left sitting on a tree, calling its mate who later joined it and they flew back and forth crossing the road . This bird looks spectacular both perched and in flight.
At the fag end of the safari we were coming down the Khinanauli main road with the evening ray’s filtering through the huge sals when a stationary vehicle with an excited tourist, near a fire line to our left brought us to our first tigress sighting. She stood undecided about crossing the main road and sat down for a while before gracefully heading back to the forest she came from.

Bijrani-Nadiya Parao resort
Day4
An unexceptional safari in the morning and we set out to the Bijrani zone. En route we stopped to see Jim Corbett’s rifle, which the international guests on jumbo safari had apparently brought from England from a private collector.  Its replica was being made. However it was not in the museum near the entry gate, but at Corbett’s winter home in Kaladhungi.
The Bijrani safari had a lot of day visitors and some were very noisy. The forest had teak and sal trees. We saw a monitor lizard crossing the road as well as one on a muddy cliff. Within 20 minutes of the safari one of the jeeps had stopped by the roadside peering into a waterhole by the road and there we saw Sharmili, a 10 year old mother of 3 cubs, cooling herself and drinking the water. After a while she started walking in the canal by the road and then onto the road itself!! We were in front of it and had a good look at her head on as she calmly walked unfazed by the jeeps following her or those in front of her. She then went to lie down by the side of the road in some undergrowth. This tigress has one canine less but has managed hunting pretty well.
Day5
A sighting of the Rufous Bellied Niltava in the morning and in the evening and last safari as we were coming down a road, Sharmili just walked in front of us, with no alarm calls at all! She was growling continuously. She walked along the road to the river bed where she startled a chital herd before jumping up a cliff and disappearing. The safari ended with an amazing display of a dancing peacock and bird love by a Blue Bearded Bee Eater which caught a number of bees and fed them all to its partner keeping only 1 or 2 for itself. The partner seemed to expect this service as he/she waited calmly without catching any bees for itself!! Thus ended our spectacular , action filled trip to the Corbett National park.
Species list:
1.Dollar bird
2.White Crested Laughing thrush
3.Shikhra
4 .Crested Serpent eagle
5.Lesser Fish Eagle
6. Pallas fish eagle
7. Changeable hawk eagle
8. Red headed vulture
9.collared falconet
10. River lapwing
11. Red wattled lapwing
12. Red avadavat
14.Purple sunbird
15.Blue Tailed Bee eater
16. Chestnut Headed bee eater
17. Green bee eater
18. Blue Bearded Bee eater
19. Common green magpie
20. White capped redstart
21. Rufous Bellied niltava
22. Black Redstart
23. Peafowl
24. Emerald doves
25. Spotted dove
26.Painted dove
27. Brown Wood owl
28.Black Stork
29.Khaleej Pheasant
30. Red jungle fowl
31. Jungle mynah
32. Common mynah
33. White eyed buzzard
34 Black Francolin
35.River tern
36.Red breasted parakeet
37. Rose ringed parakeet
38. Plum headed parakeet
39.Lesser coucal
40.Green billed Malkoha
41.Brown fish owl
42.Indian roller
43.Martin
44.Common kingfisher
45. White throated kingfisher
46.Pied kingfisher
47.Crested kingfisher
48. Stork Billed kingfisher
49.Coppersmiths barbet
50, Blue throated barbet
51. Lineated barbet
52.Wryneck
54.Greater flame back woodpecker
55.Lesser flame back woodpecker
56. Streak throated woodpecker
57. Grey capped Pygmy woodpecker
58. Himalayan woodpecker
59.Greater yellow naped woodpecker
60Grey headed woodpecker
61,Grey tree pie
62. White throated laughing thrush
63.Spangled drongo
64.Raquet tailed drongo
65.Ashy drongo
66. Black drongo
67.spotted fantail
68. Asian paradise flycatcher
69.Long tailed shrike
70. Pied bushchat
71,Black hooded oriole
72. Common Iora
73.Black lored tit
74.White browed wagtail
75. Grey wagtail
76.Blue whistling thrush
77. Common housesparrow
78. Chestnut tailed starling
79. Brahminy starling
80. Common rose finch
81.Indian robin
82.Oriental magpie robin
83.yellow eyed babbler
84. Ashy prinia
85.Tawny pipit
86. Chestnut bellied nuthatch